Ilham Aliyev: The Karabakh agreement means capitulation on the part of Armenia 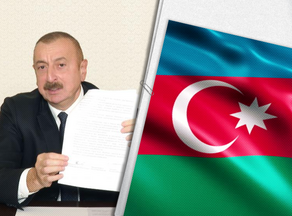 "This statement has historical significance. I should mention that this statement got signed in a video conference format. In the first stage, the leaders of the three countries must sign the agreement. However, at the last moment, Nikol Pashinyan refused to do so.

Once again, I would like to say that the behavior of the Prime Minister of Armenia, Nikol Pashinyan, can be understood. However, I think that people should be held accountable for their actions. Every person should respect himself in the most difficult, most critical situation for him and his country. Pashinyan will sign without it. We forced him. He is scared and will sign the document somewhere away from the cameras. He will not sign voluntarily. He will have to sign under an iron fist," said the President of Azerbaijan.

According to the President of Azerbaijan, the document of the agreement does not say anything about the status of the independence of Nagorno-Karabakh, and it indicates the most important political victory of Azerbaijan.

"When I offered them autonomy, they did not agree and said that Nagorno-Karabakh was an 'independent state' and that they should gain independence from Azerbaijan. Not a single word is written about it here. What happened? What happened, Pashinyan? What happened to the status quo? It got buried, disappeared, gone and will never appear again as long as I am a President," Ilham Aliyev said.

Under the agreement, hostilities in Nagorno-Karabakh will cease, Russia will send up to 2 000 peacekeepers to the territory, and Armenia will withdraw units of the armed forces.

A celebration followed the agreement in the streets of Baku. According to the President of Azerbaijan Ilham Aliyev, "the long-standing conflict between Armenia and Azerbaijan has come to an end."

Following the decision to cease fire and hostilities in Karabakh, Armenian Prime Minister Pashinyan told the country's citizens that late last night, he signed an agreement with Russia and Azerbaijan's presidents. A protest followed the prime minister of Armenia's decision to end the hostilities in Yerevan. Citizens gathered in Republic Square in Yerevan. Part of them broke into the Government House. Protesters physically assaulted the Chairperson of the Armenian Parliament. In response to the events, Prime Minister Nikol Pashinyan said he had no other choice and called on the public to remain calm.