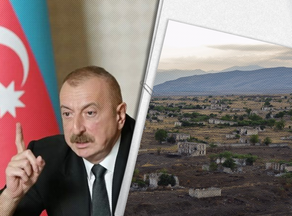 "Armenia's military potential has been dealt a crushing hit these days," President of Azerbaijan Ilham Aliyev said in his address to the population.

"We have destroyed the military-technical potential of Armenia. Where do so many weapons come from in Armenia? Armenia is a bankrupt country. The country's foreign debt is 60-70 percent of GDP. How much does this equipment cost? The number of vehicles destroyed so far is at least $ 2 billion. But their technique remains—both in the occupied and Armenian territory. The question is - Who is arming them? They criticized us that we are armed, we are buying weapons, which can aggravate the situation and turn the case in an unacceptable direction. But the question is when Armenia is armed? But where do so many weapons and equipment come from in this poor country? Today, guns and equipment are being smuggled to them. We want answers to these questions," Aliyev stated.