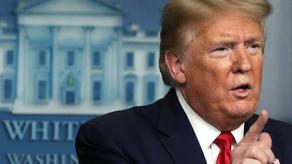 Miller told the group that subsequent measures were under consideration that would restrict guest worker programs amid the coronavirus pandemic, but “the most important thing is to turn off the faucet of new immigrant labour.

The Trump administration has been trying for years to scrap the family-based U.S. immigration model, which Miller and other restrictionists call “chain migration.” Instead, the White House favours a more restrictive system based on job skills and U.S. labour market demands.

Although Trump described his order this week as a temporary “pause,” he also said it is an open-ended move that will remain in place until he decides the U.S. labour market has sufficiently improved once the coronavirus crisis subsides. He said he will reevaluate it after 60 days and might extend the immigration restrictions to help Americans find jobs when states reopen their economies.

From March 15 to April 18, 26.5 million Americans filed for unemployment, sending joblessness to levels not recorded since the Great Depression. The economic impact could be lengthy, as it remains unclear how long the pandemic will keep businesses closed and people in their homes.

The Embassy of the United States to Georgia provides detailed information on the President’s decision:

The title of Trump’s order — “Proclamation Suspending Entry of Immigrants Who Present Risk to the U.S. Labor Market During the Economic Recovery Following the Covid-19 Outbreak” — makes explicit that the underlying rationale for the President’s restrictions are economic, not epidemiological.