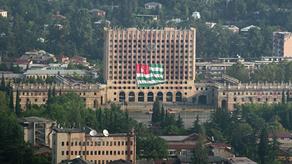 The winner is considered a candidate who gains the majority of votes. The parliament of the so-called sixth convocation was elected on March 12, 2017, in occupied Abkhazia.