International Committee of the Red Cross: Barda bombing killed one of our volunteers 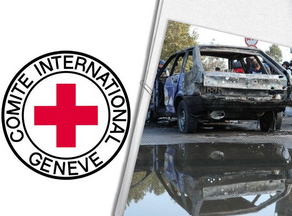 The Regional Director for Europe and Central Asia for the International Committee of the Red Cross, Martin Schuepp, has issued a statement calling for an increase in civilian casualties.

"Like thousands of civilians, the ICRC has witnessed the shelling of populated areas, causing death, wounding and destruction on both sides of the front. This is unacceptable. Sadly, a father of two, a volunteer with the Azerbaijan Red Crescent Society, died, and two other volunteers got injured. ICRC extends condolences to the family of the volunteer and the Azerbaijan Red Crescent Society," the statement said.

According to the ICRC, civilians living in the region are experiencing the consequences of these events. The death toll among civilians is high. In addition, residents receive wounds that changes their entire lives.

On October 28, 21 people were killed and up to 70 injured in a cluster missile attack by the Armenian Armed Forces on the town of Barda.