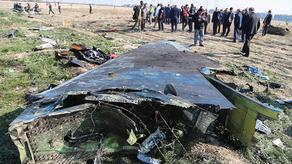 According to the Iranian Civil Aviation, the Ukraine International Airlines plane was on fire before the crash.

"The eyewitnesses said, there was a fire on the plane, and it spread throughout the fuselage," the document said.

The trajectory of the liner showed that the crew began to head back to the airport after the problems started. However, the pilot did not share the information about the emergency on board.

The Ukraine International Airlines Boeing 737 crashed on January 8. All the passengers were killed as a result. According to preliminary information, engine failure was the cause of the crash.