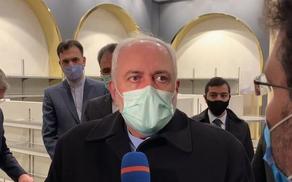 As the news agency says, he will hold talks with Azerbaijani President Ilham Aliyev and counterpart Jeyhun Bayramov and First Deputy Prime Minister of Azerbaijan Shahin Mustafayev on Monday to discuss bilateral relations and regional developments.

"Iran is happy for our friend Azerbaijan having de-occupied its territories," Zarif said when visiting Baku.

"They will also deal with new opportunities for cooperation in the region after the liberation of Karabakh's country's lands, including Iranian companies' involvement in Karabakh reconstruction,'' Irna reports.

Trilateral cooperation between Iran, Azerbaijan Republic, and Russia to complete the North-South international corridor and use the capacities of this transit route as much as possible is another issue to be discussed during the meetings between Zarif and Azerbaijani officials.

Zarif will leave Baku for Moscow for talks with the Russian officials on the second leg of his regional trip, which will take him to Armenia, Georgia, and Turkey.