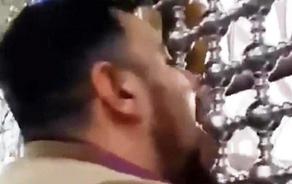 Part of the citizens from Iran believe Shiite sanctuaries will protect them from coronavirus. Ultra-religious groups are calling on the government and media to stop misleading the population. As a sign that the coronavirus is not a threat and that shrines protect them from the virus, they kiss and lick sanctuaries. Relevant videos got released on the Internet.

"Stop threatening people with the coronavirus. Stop playing with people's faith," one of the believers said. Afterward, he publicly kissed and licked a part of the mosque's wall several times.

Every year millions of people touch and kiss the sanctuaries. There is no quarantine declared in the mosques.

Earlier, an Iranian activist, Hamed Jalali Kashani, who claimed that the coronavirus was a fabricated lie to prevent people from going to parliamentary elections set on February 21, died on February 28 with the new CIVID-19. He even joked, saying he wanted to get infected to prove to everyone that the virus was a fiction.

Iran is in the top three of the most dangerous countries after China and South Korea. According to official data, 593 people got infected with COVID-19 in the country. Forty-three people died as a result, including several government officials.