Islamic State in wait for the confirmation of leader assassination

Islamic State in wait for the confirmation of leader assassination 27 October, 2019  10:55 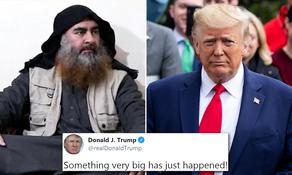 Donald Trump is making an important statement at 17:00 (Georgian time).He writes about it on his twitter.

Media writes that the President of the United States of America is to confirm the assassination of Abu Bakr Al-Bagdadi, the head of the ISIS.

“The information was received from members of Syrian government, which were present in the place of the special operation”, - Teheran informed.

Targeting the assassination of Al-Bagdadi, Pentagon, after obtaining reliable information, conducted operation in Idlib province of Syria.The Ministry of Defense of the USA has already informed the White House that as a result of the implemented raid one of the leaders had been assassinated.

As a reminder, the information about assassination of Abu Bakr Al-Bagdadi was spread by several media resources during years though none of the information was confirmed.