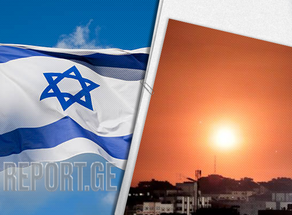 Hamas Islamist movement fired around 630 rockets at Israel on Tuesday, according to the Israeli Army Press Office.

Reports say that 150 projectiles fell inside Gazan territory and some 200 others were intercepted by Israel's Iron Dome missile defense system. Other projectiles have landed in open fields; some damage to buildings and infrastructure has been recorded in Israeli communities near the Israeli-Gazan border. Two civilians in Ashkelon were killed amid rocket fire and dozens of others have been injured.

The IDF has responded to the persistent rocket attacks with hundreds of retaliatory airstrikes against Hamas targets in Gaza. After counterattacks, 130 facilities of Hamas were destroyed and its 15 members killed.

The Israel Defense Forces (IDF) confirmed that sirens have been activated in Tel Aviv.

The Embassy of Georgia to Israel has strongly warned citizens of Georgia residing in Israel against leaving their houses.

The IDF has released the video footage presented below.