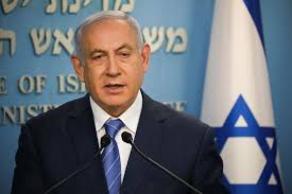 The Prime Minister of Israel Benjamin Netanyahu asked police for help as he and his family are in danger of being killed.

"A few days ago, I filed a complaint because of the treats directed towards my family and me. Unfortunately, I had to file another complaint against the person who described how he was going to kill us," Netanyahu wrote on Twitter.

The Israeli Prime Minister addressed the police in November of 2019. He said he was being threatened on Facebook and demanded an investigation.