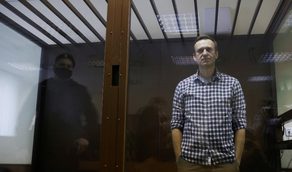 Jailed Kremlin critic Alexei Navalny asked for help from a public commission to get access to painkiller injections for severe pain in his leg, the head of the commission said in a statement published on late on Saturday, Reuters reports.

Navalny was jailed last month for two and a half years on charges he called politically motivated. He was arrested as he returned to Russia from Germany in January, where he had been recovering from what doctors said was a nerve agent poisoning.

The 44-year old opposition politician has said in a statement that his request for treatment by a civilian doctor had been rejected and that he was being woken up by a guard every hour during the night in a deliberate attempt to undermine his health.

Members of a local Public Monitoring Commission, a semi-official body with access to Russian prisons, visited Navalny in his penal colony 100 km (60 miles) east of Moscow on Friday.

“From a conversation (with Navalny) we learned that he feels pain in his leg and he asked for help in getting injections of Diclofenac to reduce pain. He is still able to walk,” said Vyacheslav Kulikov, the head of the commission, in an online statement.