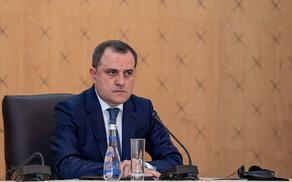 During his visit to Washington, Azerbaijani Foreign Minister Jeyhun Bayramov met with the co-chairs of the OSCE Minsk Group.

Following the Azerbaijani Foreign Ministry, during the meeting, Jeyhun Bayramov noted that the Armenian side violated the humanitarian ceasefire twice and purposefully continues to fire rockets at the civilian population even in cities outside the conflict zone.

The Azerbaijani Foreign Minister informed the co-chairs that the Armenian leadership does not want a diplomatic solution.

Bayramov stressed that all these steps and statements demonstrate the Armenian side's destructive policy.