Joe Biden reflects on the protests in the USA 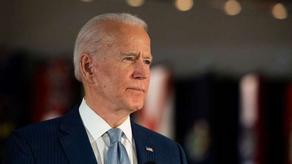 The US former Vice-President and the candidate for presidential elections from Democratic Party, Joe Biden, reflects on the acts of protest of the murder of George Floyd.

In his post placed on the social net, he condemns any violence that threatens the lives of people is inapplicable. He stresses that Americans have the right to express their attitude towards injustice, but it should not threaten social security.

Reminder: It is already several days that the riot is taking place in many cities in the USA.

He lost his conscious and died in the hospital.