Kim Jong-un vows to free North Korea from US sanctions 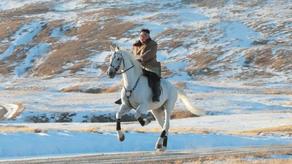 Kim Jong-un the leader of North Korea has vowed to free the country of US sanctions. The statement was published by North Korean media with the photo where Kim Jong-un is sitting on white horse.

The photo is taken with the view of snowy Mount Paektu which has a symbolic and propaganda purpose. Mountain which is the highest point on the Korean peninsula is considered a symbol of the Kim Jong-un Family Dynasty and a symbol of dynamic governance.

The United States has imposed sanctions on North Korea since 2006. In 2016 Donald Trump tightened sanctions.

Nuclear talks between Washington and Pyongyang have been underway since 2018.

South Korean media suggested that the photo may be an indication that Kim is considering a new strategy for relations with the USA.