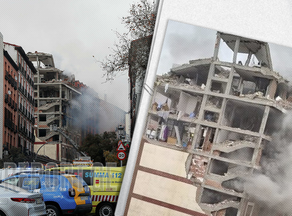 Four people were killed in a massive explosion in central Madrid, according to local media outlets.

Sirens blared in central Madrid on Wednesday afternoon after a large explosion, which appears to have destroyed at least one building.

The blast happened just before 3 p.m. local time (1400 GMT) in Calle de Toledo, a main thoroughfare just south of the center. The building, reportedly owned by the archdiocese, is located near a school, a church, and a nursing home.

There was no accurate report of deaths. La Sexta says at least six people were injured, and at least two died, with the gas leak resulting in the explosion.