Largest painting in the world sells for $ 62 million 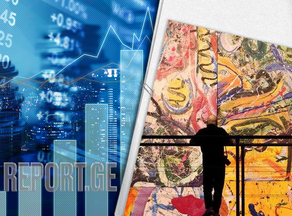 The world's largest painting, "The Journey of Humanity," painted by British artist Sasha Jaffrey, sold for $ 62 million at a Dubai auction.

The manager of a firm that deals with cryptocurrencies, Andre Abduni, purchased the work.

It was noted that the artist worked on a canvas the size of two football fields for seven months at the Atlantis Hotel in Dubai. It was initially planned that the painting would be divided into 70 parts and sold at six auctions in different countries for about $ 30 million.

The money raised by Jaffrey will be donated to UNESCO, UNICEF, and other charitable projects.

"We hope to save the lives of 200 million children and give them a chance to change the world in the poorest countries," said the artist.

The drawing is 1500 square meters. Sasha Jeffrey has been working on it for the past year. Children from 140 countries participated in the creation of the painting. They sent the artist their drawings, and he used them to create a larger work.

Up to 5,000 liters of paint and up to 1,000 brushes were used to create the drawing. The picture entered the Guinness Book of Records as the largest art painting in the world.