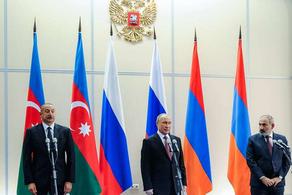 We _ Prime Minister of Armenia Nikol Pashinyan, President of Azerbaijan Ilham Aliyev, and President of Russia Vladimir Putin _ met in Sochi on 26 November 2021. We discussed the compliance with the Statement of 9 November 2020 on a complete ceasefire and end of military activities in the conflict zone of the mountainous region of Nagorno-Karabakh, as well as the Statement of 11 January 2021 on unblocking all economic and transport links in the region.

We reaffirmed our obligations on strict adherence to all provisions and consistent implementation of the Statements of 9 November 2020 and 11 January 2021 in the interests of ensuring stability, security, and economic development in the South Caucasus. We agreed to exert more active joint efforts to rapidly perform the remaining tasks envisaged in the Statements of 9 November 2020 and 11 January 2021.

We pointed out a significant contribution by Russia's peace forces in stabilizing the situation and ensuring peace in the region.

We agreed to take further steps to enhance the level of stability and safety on the Azerbaijan-Armenia border and bring the task of the creation of the bilateral commission for the delimitation of the state border between the republics of Azerbaijan and Armenia with the help of consultations by Russia to be provided based on the parties' request.

We defined the activities by the Trilateral Working Group formed in accordance with the Statement of 11 January 2021, presided by the vice-premiers of the Republic of Azerbaijan, Republic of Armenia, and the Russian Federation to unblock all economic and transport links in the region as highly positive.

We stressed that specific projects must be launched to unleash the region's economic potential,'' the joint statement reads.