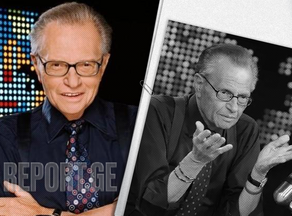 One of the world's most famous journalists, Larry King, has died at 87.

The well-known CNN talk-show host was hospitalized for COVID-19 on January 3.

He was diagnosed with lung cancer in 2017 and underwent surgery.

Larry King began his career in WAHR Radio in 1957. He became popular with his Larry King Live show, which he hosted for 25 years on CNN.