Man in R2D2 costume falls over at Comic Con - VIDEO 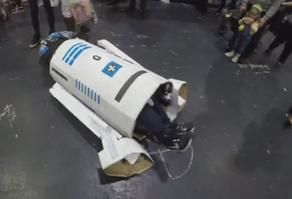 A hilarious incident occurred in London: a cosplay enthusiast dressed as R2D2 from Star Wars wobbled over and fell flat on his back at Comic Con 2019.

The funny incident happened today (October 27) at the comic convention in ExCeL London.

The unfortunate cosplayer lost his balance and fell with a crash to the floor surrounded by visitors to the convention.

As his arms were inside the droid costume, he was unable to get up off the floor and could only kick his legs to alert convention-goers that he needed help.

A few visitors picked him, checked he wasn't injured and helped him to put his domed headgear back on so that he could continue his act.