May women be respected and protected: Pope Francis 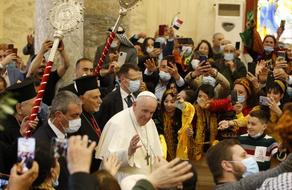 Pope Francis told the Christian community of Iraq that they’re proof in flesh and blood of the victory of life over death.

Speaking to a crowd that saw its girls and women sold as property by Islamic State terrorists, and on the eve of International Women’s Day, Francis gave a “heartfelt thank-you to all the mothers and women of this country, women of courage who continue to give life, despite the wrongs and hurts.”

“May women be respected and protected,” he said. “May they be shown respect and provided with opportunities.”

On Friday’s flight from Rome to Iraq, Francis was hand-delivered documents from ISIS that detailed women's price during their reign of terror in Iraq and Syria between 2013 and 2017.

Recovered by the papal charity Aid to the Church in Need, they show that a woman over 40 had a “cost” of $42, while $173 would “buy” a girl between one and nine.