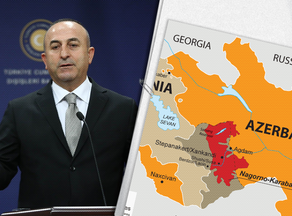 "The only way to resolve the Nagorno-Karabakh conflict is for Armenia to leave the territory of Azerbaijan," the Minister of Foreign Affairs of Turkey, Mevlut Cavusoglu, said.

"Until Armenia leaves the territory of Azerbaijan, the problem will not be solved," the Minister of Foreign Affairs of Turkey noted.

According to Cavusoglu, Turkey wants to resolve the Nagorno-Karabakh conflict and stands by Azerbaijan.

"We are on the side of Azerbaijan both on the battlefield and at the negotiating table," Mevlut Cavusoglu said.