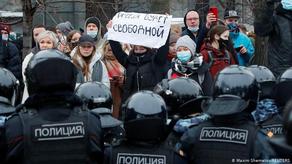 Alexei Navalny's wife, Yulia Navalnaya, was among the detainees, but she was later released.