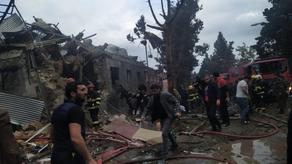 The International Foundation for Better Governance (AISBL) has published an article on the Nagorno-Karabakh conflict, which focuses on the renewed conflict in the region since September 27 and the situation created by the hostilities.

The article reads that in the city of Shusha in the Nagorno-Karabakh region, recognized as part of Azerbaijan by the UN; a historic cathedral got bombed during the fighting between Armenia and Azerbaijan. The Armenian side has accused Azerbaijan of attacking the historic temple.

20% of Azerbaijani territories, including Shusha, have been under de facto Armenian control since the early 1990s despite 4 UN resolutions asking for the immediate withdrawal of Armenian forces.

"Both sides blame each other for the current violence. Azerbaijan accuses the Armenian army of firing on civilians in Ganja, Tartar, Beylagan, Garbanoy, and Mingachevir. These regions are a long way from the center of hostilities and have no military targets. Nevertheless, they became the target of Armenian military attacks, including Mingecevir, where the largest power plant in the South Caucasus is located," the article said.

According to media reports, accusing Azerbaijan of blowing up a temple in Shusha is a rather dangerous topic, which may provoke religious motives that did not exist before.

Armenia is an ancient Christian country where the Church plays a major role in the spiritual life, development, and national identity preservation.

"According to the publication, the basis of the current war in Nagorno-Karabakh is the restoration of international law and sovereign control, and its escalation into religious propaganda and controversy would be wrong and very dangerous.

According to the publication, it is necessary for mediators involved in settlement of the regional conflict to focus on the legal side of the process, which concerns the territories and their sovereignty, and not to allow the parties to insult each other with racial and religious stereotypes. It will make the emotionally vulnerable situation in the Caucasus even more explosive," reads the article.