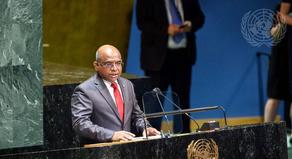 The Minister of Foreign Affairs of the Republic of Maldives, Abdulla Shahid, has been elected as President of the 76th Session of the UN General Assembly.

"Abdulla Shahid's longstanding diplomatic experience, including in his current role as Minister of Foreign Affairs, has given him a deep understanding of the importance of multilateralism in addressing today's global challenges," the Secretary-General of the United Nations, António Guterres, stated.