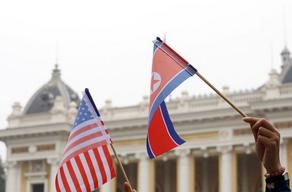 Since mid-February by President Joe Biden's administration, North Korea has not responded to behind-the-scenes diplomatic outreach, including to Pyongyang's mission to the United Nations, Reuters reports.

The disclosure of the so-far unsuccessful U.S. outreach, which has not been previously reported, raises questions about how Biden will address mounting tensions with Pyongyang over its nuclear weapons and ballistic missile programs.

It also adds a new dimension to a visit America's top diplomat and defense secretary will make next week to South Korea and Japan, where concerns over North Korea's nuclear arsenal are expected to be high on the agenda.

The senior Biden administration official, speaking on condition of anonymity, offered few details on the diplomatic push. But the official said there had been efforts to reach out to the North Korean government "through several channels starting in mid-February, including in New York."

"To date, we have not received any response from Pyongyang," the official said.

North Korea's mission to the United Nations did not immediately respond to a request for comment.