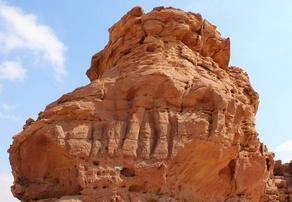 Giant images of camels, which are plotted from rocks, were discovered in 2018, but then archaeologists attributed the time of their creation to the beginning of our era, WION reports.

According to the latest research, they appeared 7-8 thousand years ago. Thus, these are the most ancient sculptures known to animal science. They are much older than Stonehenge (4.5-5 thousand years) and the pyramids of Giza (4.5 thousand years).

Determining the age of stone sculptures is a very difficult task. Unlike rock drawings, they do not contain organic remains, the age of which is easily determined.

Researchers at the King Saud University, the Max Planck Institute for the Science of Human History in Germany, and the French National Centre for Scientific Research used a number of methods: Instrument trace analysis, modeling of weather and erosion processes, portable X-ray fluorescence spectrometry. Through all this, they measured the density of the mineral deposits and were able to date them according to fragments.

In addition, archaeologists excavated near the monument and found stone tools and animal bones, which they were able to date using the radiocarbon dating method.

The results of their work were published in the American Academic Journal of Archaeological Science.

The complex, known as the Camel Camp, includes realistic images of various animals. There are three giant camel statues perched on top of a mountain.

The exact destination of the complex is still unknown. Scholars suggest that for a long time, it was a meeting place for nomadic tribes.