Oldest person on the planet died 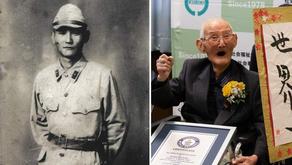 The oldest man on the planet, Chitetsu Watanabe, who lived in Japan, died at the age of 112.

He spent the last years of his life in a shelter for the elderly in Niigata Prefecture. Two weeks before his death, Watanabe, the oldest man on earth, got included in the Guinness Book of Records.

Before Watanabe, the oldest man on the planet was Masazo Nonaka, who was from Japan as well. Masazo died on January 20, 2019, at the age of 113.