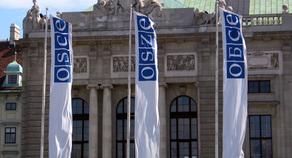 The OSCE Permanent Council's special meeting has been held on the issue of Mountainous Karabakh. A total of 57 OSCE member states' representatives were present at the session. The Chairperson of the OSCE Permanent Council, Ambassador Igli Hasani, voiced concerns over the exacerbation of the situation in the conflict zone and current attacks. The ambassador also expressed concerns about increasing victim numbers and offered his condolences to the victims' families.

Personal Representative of the OSCE Chairperson-in-Office Andrzej Kasprzyk told the council members that he is being provided with information on the current developments in the conflict zone by local collaborators. In the ambassador's words, he is in touch with the conflicting parties, and his team shows its willingness to resume monitoring of the situation as soon as possible.

The OSCE leadership focused on the prospect of finding a way out of the current situation through negotiations. The necessity of immediate termination of the conflict and resumption of negotiations to resolve the issue was stressed at the session.