Painting worth $ 500,000 accidentally damaged at exhibition in Seoul - PHOTO - VIDEO 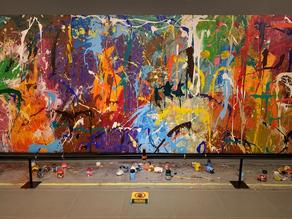 Visitors to a shopping mall in Korea have nearly led the exhibition organizers to a heart attack. They accidentally destroyed a unique painting worth almost half a million dollars.

They said they did it because they wanted to get involved in the art.

It turned out that they thought that the paints and brushes next to the huge abstract canvas were a deliberate idea and that anyone could add any detail. These attributes were part of the exhibit.

The administration decided not to punish them. Now they are discussing with the artist whether it is worth restoring the painting.

Just in case, the organizers attached fences to the picture and signs saying "do not touch."

A young couple accidentally vandalized a painting worth about $500,000 at a gallery in Seoul, its exhibition head said on Friday. Footage showed the couple using acrylic paint and a brush that were part of a display near the artwork to splatter a new addition to the piece. pic.twitter.com/eYy0gsFHX3