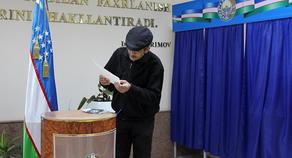 The Parliamentary elections are taking place in Uzbekistan. The population is electing local councils and the members of the legislative body. These are the first election held after the death of President Islam Karimov.

According to the local election administration, there are over 10 000 voting centers in Uzbekistan. The voter list reads 20.5 million registered voters.

Media emphasizes on the fact that there are faces among the registered parties that have never been noticed in political activities. The level of women’s activity is also high. The women represent 41% of the election candidates.

The Election Administration will publish the results tomorrow.