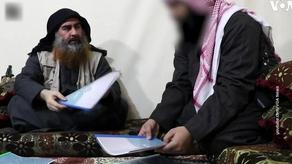 According to the Reuters news agency, U.S. President Donald Trump said on Monday he may declassify and release part of the video taken on Saturday of the raid in Syria in which Islamic State leader Abu Bakr al-Baghdadi was killed.

The video is believed to include aerial footage and possibly footage from cameras mounted on the soldiers who stormed Baghdadi’s compound.

“We’re thinking about it. We may,” Trump told reporters before flying to Chicago. “We may take certain parts of it and release it.”

Trump said on Sunday that Baghdadi had died “whimpering and crying” in a raid by U.S. special forces in Syria, fulfilling his top national security goal.

World leaders welcomed Baghdadi’s death, but said the campaign against Islamic State, a group that carried out atrocities in the name of a fanatical version of Islam, was not over, with so-called lone wolves likely to seek revenge.

Information on elimination of the leader of terror organization ISIS was spread on Oct 27. Donald Trump confirmed his assassination.