Police to use tear gas to disperse protesters in Paris - VIDEO 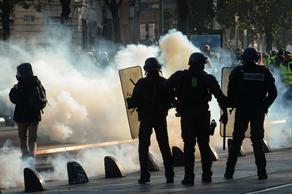 French police have fired tear gas at protesters and arrested dozens of people as thousands of "yellow vest" anti-government protesters returned to the streets of Paris. Reportedly the police detained 32 persons.

Protestors demand the resignation of the President Emmanuel Macron.

As a result of the 45-day transport strike, the capital of France experiences serious transportation limits.

At the Gare de l'Est railway station, dustbins were set on fire and windows were broken, according to local broadcaster Franceinfo. Fires were also reported near the Gare de Lyon.

“While the Yellow Vest movement has held demonstrations since November 2018, the numbers have swelled in recent weeks as union members opposed to Macron's proposed pension reform have also taken to the street.

Critics say the reforms will effectively force millions of people to work longer for a smaller pension.

Huge anti-government protests in the streets of Iran...or is it Russia?