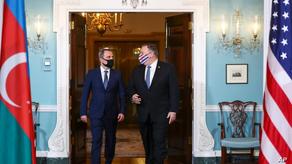 U.S. Secretary of State Mike Pompeo has met with Azerbaijani and Armenian foreign ministers, according to Reuters.

The diplomats have not made any comments with journalists after the meeting.