Pope Francis calls for ending violence and extremism in Iraq 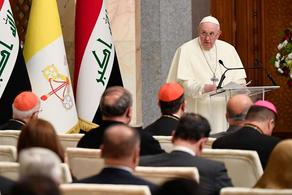 Pope Francis has honored the victims of one of Iraq’s most brutal massacres of Christians by Islamic militants by saying their deaths are a reminder that violence is incompatible with authentic religious teaching.

Francis was welcomed joyfully with song and a yellow and white flower necklace as he entered Our Lady of Salvation Cathedral, hours after he arrived in Iraq for the first-ever papal visit.

Francis was praying at the church, where on Oct. 31, 2010 extremists gunned down worshippers in an attack that left 58 people dead. Forty-eight were Catholic, and the Vatican is considering their beatification as “martyrs” in the first step to possible sainthood. Photos of the 48 adorned the altar where Francis spoke.

Meeting with Iraqi priests, seminarians and religious sisters, Francis said: “Their deaths are a powerful reminder that inciting war, hateful attitudes, violence or the shedding of blood are incompatible with authentic religious teaching.”

Francis noted Iraqi Christians had suffered during years of war, economic hardships and persecution. But he urged them to persevere “in order to ensure that Iraq’s Catholic community, though small like a mustard seed, continues to enrich the life of society as a whole.”

Pope Francis urged Iraqis to value their religious minorities and consider them a “precious resource” to protect, not an obstacle to eliminate as he opened the first-ever papal visit to Iraq with a plea for tolerance and fraternity.

Francis told President Barham Salih and other Iraqi authorities gathered at the Baghdad palace inside the heavily fortified Green Zone that no one should be considered a second-class citizen. He said Iraqis of all faiths deserve to have the same rights and protections as the Shiite Muslim majority.

He said: “Only if we learn to look beyond our differences and see each other as members of the same human family will we be able to begin an effective process of rebuilding and leave to future generations a better, more just and more humane world.”