Pope Francis says he prays for peace in Caucasus 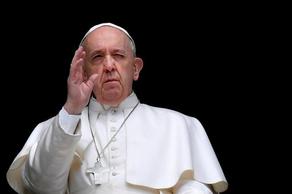 Pope Francis has appealed to conflicting parties in Armenia and Azerbaijan's Caucasus nations to "accomplish concrete deeds of goodwill and fraternity" for a peaceful solution, Vatican News reports.

Speaking on Sunday after the Angelus prayer, the Pope said he has had worrying news of clashes in the Caucasus region and praying for peace.

He urged leaders to find a solution "not through the use of force and arms, but the means of dialogue and negotiation," and he asked all Christians to gather with him in prayer for peace for the region.

Tensions have been observed at the Azerbaijan-Armenia border since the early morning. Azerbaijani media say that Armenia carried out a large-scale attack this morning and killed peaceful citizens.