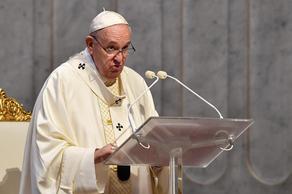 Pope Francis urged the people of Lebanon to work together in the wake of the devastating port blast to give birth to a new "free and strong" coexistence, writes Reuters.

"Last Tuesday's catastrophe calls everyone, beginning with the Lebanese people, to work together for the common good of this beloved country," - Francis said.

Pope said the coexistence of cultures in the county had been made much more fragile by the blast.

The pope has donated 250,000 euros to the Church in Lebanon to help victims of the explosion.

Beirut explosion occurred on August 4. The explosion's cause was 2,759 tons of ammonium nitrate stocked in inappropriate conditions in a warehouse at the port of the Lebanon capital. The death toll of the explosion in the capital of Lebanon reached 158, while 60 more people are missing. The number of injured exceeds 6,000.