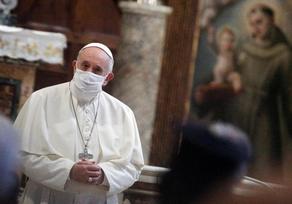 Pope Francis wore a mask for the first time at a public function on Tuesday when he and other religious leaders attended a prayer service for peace around the world.

The pope wore a white mask during the service at the Rome Basilica of Santa Maria in Aracoeli. Previously he wore masks only in a car taking him to his weekly audiences in the Vatican.

He had come under some criticism, particularly on social media, for not wearing a mask at his general audiences and sometimes coming in relatively close contact with visitors.