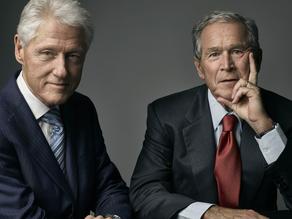 The portraits of former Presidents Bill Clinton and George Bush were removed from the Grand Foyer of the White House and replaced by those of two Republican presidents, writes CNN.

According to the White House tradition, portraits of the most recent American presidents are given the most prominent placement in the executive mansion entrance, visible to guests. The portraits of Clinton and Bush were moved into the Old Family Dining Room, a small, rarely used room not seen by most visitors.