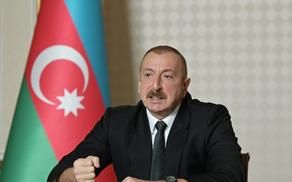 In an interview with the French newspaper Le Figaro, President of the Republic of Azerbaijan Ilham Aliyev spoke about Karabakh's future views.

"We see Karabakh as a prosperous, safe territory of Azerbaijan, where people live peacefully and with dignity, where the Azerbaijani and Armenian communities live together. We plan to develop this territory as we develop all other areas of Azerbaijan," Ilham Aliyev declared.

"We have significant economic achievements. Our poverty level is shallow, about 5%. In Armenia, this figure is close to 50%. Besides, we boast a low unemployment rate. Before the pandemic, it was about 5%, and currently, it is 7%. Compared to Karabakh, where this problem is largely observed, the difference is high. We can provide a better life for the Armenians and Azerbaijanis, who will return there. I believe that the two nations, two peoples, will make peace," the President of Azerbaijan said.