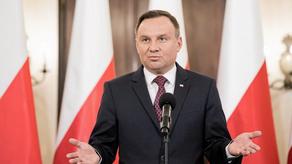 His infection was announced by the presidential minister, Blazej Spychalski, who said Duda, an ally of the ruling nationalist Law and Justice Party, was "feeling fine" at the diagnosis time. The day before officials announced his infection, the number of new cases in the country of 38 million hit a daily record of more than 13,600.

The 48-year-old conservative leader was tested on Friday. There was no immediate word on how the diagnosis would affect government operations, Deutsche Welle says.