Prosecutor General of Azerbaijan: 90 civilians have become victims of the Armenian terror so far 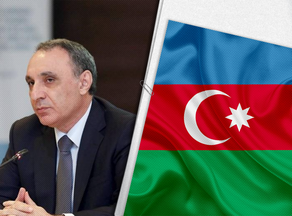 "Since September 27, 90 civilians have become the victims of Armenian terror," Kamran Aliyev, the Prosecutor General of Azerbaijan, stated.

He is currently in Barda with a diplomatic corps accredited in Azerbaijan.

"Armenia will be held accountable for these actions; sooner or later, the perpetrators will be brought to justice. The terrorist attack in Azerbaijan is linked to its success on the battlefield. I can say with full responsibility that Azerbaijan always succeeds when fighting," Kamran Aliyev said.

On October 28, 21 people were killed and up to 70 injured in an attack on the town of Barda by Armenian armed forces using cluster missiles banned by international law.

According to the Azerbaijan National Agency for Mine Action (ANAMA), Barda district was fired upon from the Smerch multiple-launch missile system. The total number of cluster bombs dropped equals 144.