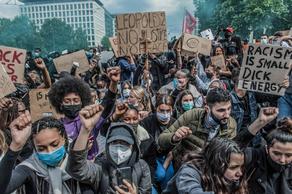 Police used water cannons and tear gas against protesters in the Belgian city of Liege.

Media outlets say the protest was initially peaceful but escalated into riots and clashes between protesters and law enforcement officers.

The protesters attacked police officers as they threw stones at police buildings and vehicles.

The protest was caused by a video that appeared on the Internet, showing a “violent” arrest of a young African woman.

African migrants loot businesses and clash with the police after a #BlackLivesMatter protest in the city of #Liege, #Belgium (!!!) today. Vid by @based_belgium (worth a follow) pic.twitter.com/MjatlEAZlb