Protesters at Hong-Kong University are surrounded by police

Protesters at Hong-Kong University are surrounded by police 17 November, 2019  13:22 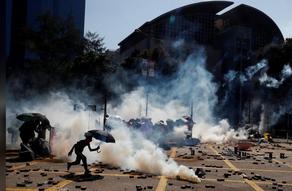 After collisions between anti-government act participants and police in Hong-Kong the police surrounded the central building of Polytechnic University.

According to Reuter’s information one of police departments used tear gas against the protesters. The protesters in the University building built barricades to block the police. Molotov cocktails are in use.

According to the information spread by the police the police spokesman was hit by an arrow thrown by the protesters.

The protesters blocked the tunnel and the main highway of Hong Kong.

It is already six months that the acts of protest continue in Hong Kong. The government announced emergency regime and closed down the educational institutions.