Protesters in Beirut broke into the Ministries' buildings 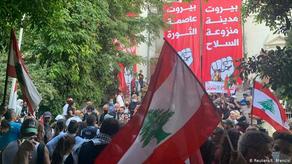 Anti-government protesters broke into the buildings of two Ministries in the capital of Lebanon.

According to local media information, the protesters broke into the Ministries of Labor and Internally Displaced Persons.

Clashes between law enforcers and protesters resumed today at night at the building of Parliament. Police used tear gas against the protesters.

Beirut explosion occurred on August 4. The explosion's cause was 2,759 tons of ammonium nitrate stocked in inappropriate conditions in a warehouse at the port of the Lebanon capital. The death toll of the explosion in the capital of Lebanon reached 158, while 60 more people are missing. The number of injured exceeds 6,000.

An anti-government protest following the massive explosion resulted in clashes between the protesters and law enforcers. The number of injured in the clashes is 728.