Protesters pulled down the statue of Christopher Columbus in the USA

Protesters pulled down the statue of Christopher Columbus in the USA 5 July, 2020  10:56 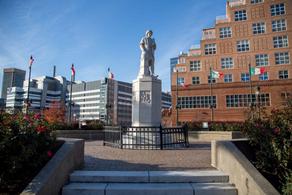 While much of the country celebrated Independence Day Saturday, protesters in Baltimore toppled a statue of Christopher Columbus and threw it into the Inner Harbor, CNN reported.

While in Washington at the White House, the protesters burnt the USA flags after the speech of Donald Trump.

On the background of the protest, President Trump signed a new law authorizing the Federal government to punish vandals by ten years of jail for their acts against monuments and other state property.