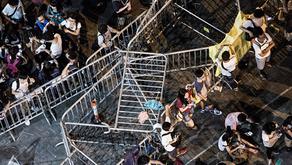 It is already the second day that the protest at White House continues.

Protesters converged at the White House and pushed security barricades, in one of many new protests to emerge around the country. Police used tear gas to force protesters to disperse.

Protesters could be seen standing on top of Secret Service vehicles and a security booth.

Some in the crowd ripped away from the bike rack barriers, set a police car on fire, and crashed the nearby shops.

The US former Vice-President and the candidate for presidential elections from Democratic Party, Joe Biden, reflected on the acts of protest of the murder of George Floyd. He stressed that Americans had the right to express their attitude towards injustice, but it should not threaten social security.

Reminder: It is already several days when the riot took place in 17 cities in the USA. Law enforcers arrested around 1,400 people.

Reminder: It is already several days that the riot is taking place in many cities in the USA.

He lost his conscious and died in the hospital.