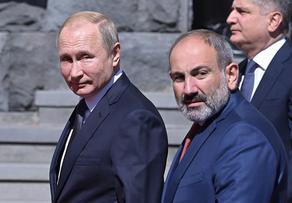 Under the Kremlin, Armenia was the phone call initiator.

"The parties discussed the sharp exacerbation of the situation in the zone of the Nagorno-Karabakh conflict. The Russian side expressed concern over the resumption of large-scale armed clashes. It is important to take all the necessary measures to prevent further escalation of the confrontation, and most importantly, it is necessary to stop hostilities,'' the Kremlin official statement reads.