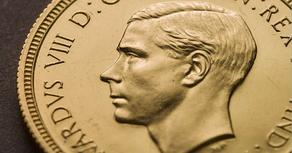 One of the World rarest sovereign coins have been sold for a record price of one million pounds.

The coin with the portrait of Queen Elizabeth’s uncle was prepared when Edward VIII became a King in 1936 before he abdicated in December 1936 — quitting his job as a king — to marry American divorcee Wallis Simpson. The coin with his face has never been circulated.

The buyer, a private collector, prefers to remain anonymous. According to the specialists, it is one of the most demanded items among collectors.