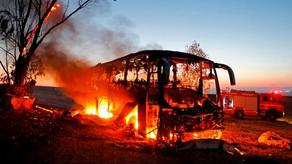 A rocket strikes the city of Holon, south of Tel Aviv, injuring a number of people, including one person seriously, medics say.

The Magen David Adom ambulance service say medics are on the scene treating the wounded.

The rocket appears to have struck a bus in the city.

The exact number of casualties and their conditions are not immediately known.

Hamas Islamist movement fired around 630 rockets at Israel on Tuesday, according to the Israeli Army Press Office.

Source The Times of Israel